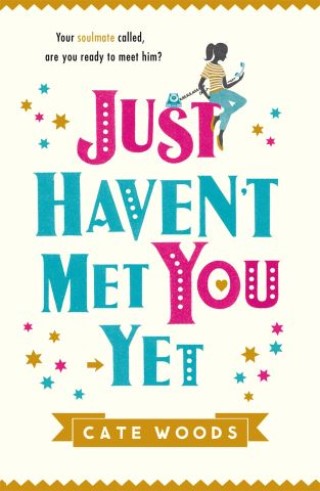 Just Haven't Met You Yet

a laugh-out-loud comedy with an ingenious twist!

'A heartwarming read with an ingenious twist' OK Magazine. Perfect for fans of Milly Johnson, Paige Toon and Jill Mansell.

Percy James has everything a girl could want: a comfy flat, a steady relationship and a truly lovely group of friends. Then she is approached by Eros Tech. Eros is 'the future of love' - an agency that brings together soulmates using phone data. Percy has been identified as a match for one of Eros's super wealthy clients. The only problem is she already has a boyfriend . . . but what if this is *destiny*? Would you - could you - pass up a chance to meet your one true love?

Cate Woods: Cate Woods made the most of her degree in Anglo-Saxon Literature by embarking on a career making tea on programmes including The Big Breakfast, Who Wants to be a Millionaire and French & Saunders. After narrowly missing out on the chance to become a Channel 5 weather girl she moved into journalism, where she interviewed every famous John, from Prescott to Bon Jovi, ghostwrote a weekly column for a footballer's wife and enjoyed a brief stint as one half of Closer magazine's gossip-columnist duo, 'Mr & Mrs Showbiz'. Cate left the magazine world in 2009 to pursue a full-time career ghostwriting celebrity autobiographies and novels. She lives in London with her husband (not Mr Showbiz) and two small children. Just Haven't Met You Yet is her first novel under her own name.