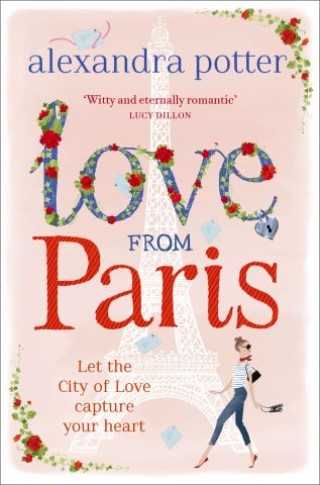 How far would you go for love?
When new boyfriend Jack stands her up at the airport, Ruby Miller dries her tears, jumps on the Eurostar and heads to Paris. She thinks she's going there to visit an old friend and have a total break from romance. But the City of Love has other ideas.
A locked apartment where time has stood still, a bundle of long-lost love letters and a flirtatious French lawyer sweep Ruby into a mystery that spans over seventy years. Who is the author of the letters? Why did the owner of the apartment close up the shutters and flee Paris before the war, never to return? And what secret was she hiding?
As the mystery deepens, Ruby turns love detective but it's not long before the ghosts of the past throw her own love affair into jeopardy.

From the bestselling author of Me and Mr Darcy, this magical romantic comedy is for every girl who has ever dreamed of the glittering lights of Paris and of a love that last a lifetime . . .

Alexandra Potter was born in Yorkshire. Having lived in Los Angeles and Sydney after university, where she worked variously as a features editor and sub-editor for women's magazines including Elle, Company, Red and Australian Vogue, she now writes full time and lives between London and Los Angeles. She is the author of nine internationally bestselling novels of romantic fiction with a magical twist, including Don't You Forget About Me and Me and Mr Darcy, which won the Best New Fiction Award at the Jane Austen Regency World Awards 2007.
You can find out more at www.alexandrapotter.com or on her Facebook page at www.facebook.com/Alexandra.Potter.Author or follow Alexandra on Twitter @AlexPotterBooks.