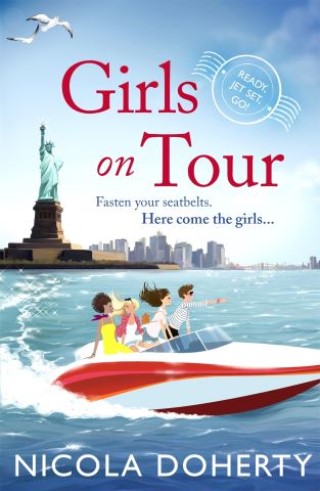 Poppy is bound for Paris, the City of Love. Could this be her chance to end her epic dry spell?

Lily is en route to her cousin's wedding in LA, where she's willing to break a few rules to land her dream role.

Maggie can't wait for her romantic ski holiday in Meribel - until it goes seriously off-piste.

Rachel packs for a glamorous Roman holiday, but a blast from the past is about to sabotage la dolce vita.

The girls get together and fly to Manhattan. But someone's been hiding a big secret in the Big Apple...

Hilarious, romantic and unputdownable, Girls on Tour is an irresistible series of interlinked stories about four ordinary girls who have extraordinary fun in faraway places. Follow them in an unforgettable year that includes breaking up, making up, new jobs and some big surprises ...

Perfect for fans of Lindsey Kelk's I Heart ... novels. Previously published as five e-novellas, now in one volume with fabulous brand new material.

Nicola Doherty: Nicola Doherty grew up in Monkstown, Co. Dublin, and worked in book publishing before leaving to pursue a freelance and writing career. Her first novel The Out of Office Girl was shortlisted for the Romantic Novelists' Association Awards in the Romantic Comedy category. Nicola lives in Highbury, north London with her husband and no cats (yet).