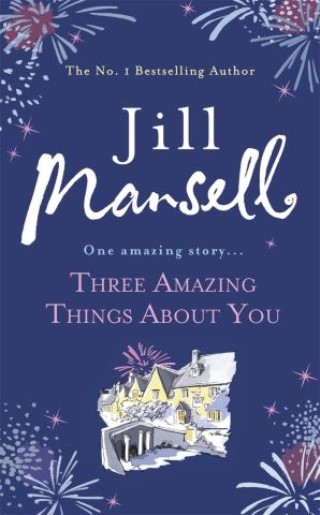 Three Amazing Things About You

A touching romantic novel about a young woman whose time is running out - a Sunday Times hardback bestseller. Not to be missed by readers of Jojo Moyes and Erica James.

Jill Mansell's enchanting new novel will drive readers to seize life with both hands and make the most of every minute...

Hallie has a secret. She's in love. He's perfect for her in every way, but he's seriously out of bounds. And her friends aren't going to help her because what they do know is that Hallie doesn't have long to live. Time is running out...

Flo has a dilemma. She really likes Zander. But his scary sister won't be even faintly amused if she thinks Zander and Flo are becoming friends - let alone anything more.

Tasha has a problem. Her new boyfriend is the adventurous type. And she's afraid one of his adventures will go badly wrong.

THREE AMAZING THINGS ABOUT YOU begins as Hallie goes on a journey. A donor has been found and she's about to be given new lungs. But whose?

Jill Mansell is the author of over twenty Sunday Times bestsellers including YOU AND ME, ALWAYS, THE ONE YOUR REALLY WANT and THREE AMAZING THINGS ABOUT YOU. TAKE A CHANCE ON ME won the Romantic Novelists' Association's Romantic Comedy Prize, and in 2015 the RNA presented Jill with an outstanding achievement award.

She lives in Bristol with her family.